I went out shopping the other day, and as I was driving into the car park of one of Queensland’s biggest malls, I rounded a corner and found my path blocked by a couple of young lads and their spangly cars, boom boxes ... booming, paint jobs of orange and purple flames, strobe strips flashing away on the dashboards impatient for Saturday night. They were going at it hammer and tongs: shaking fists, shouting insults, each claiming that last available parking space for himself – and I couldn’t help quipping to Princess Spendalot, ‘They remind me of me when I was young and stupid.’

Of course, the memory flood gates opened, and even as I manoeuvered our behemoth around the tacky obstruction and headed to the next level (I’m happy to report that neither of the Stupids was adorned with those Carlos Fandango flared trousers I used to wear) I’d started my journey and was travelling back to the Eighties at an alarming speed.

Welcome aboard the Moronic Express, stopping only at Young, Stupid and Idiotsville.

The human mind’s a mystery to me, so I won’t try to analyse why or how I ended up at The Night of the Pistachios, but there I was, eighteen years old and walking into my first wine bar in Perth city centre, pockets stuffed with pound notes and condoms and my new-found sophistication tripping me.

I wasn’t alone. Dick, my best mate at the time, was with me – he’d recommended the place because his father had taken him there the week before to celebrate his eighteenth birthday – and I naturally followed his lead, up the disinfected marble stairs and through the wide glass doors. The carpet was plush, the seats red velvet, and the intimately-lit bar had that look of sanctuary about it that draws in the unwary.

We moseyed on up to the penguin who was busily polishing his wine glasses, eyeing the elegantly dressed table of beauties to our right and trying our best to broaden our shoulders that crucial few millimetres. I, at least, had the required amount of designer stubble, but Dick hadn’t quite started shaving and could best be described as fluffy... But that worked in my favour, right? I mean, girls prefer that manly, semi-rough appearance over the ‘Mum says I have to be home by ten’ look, right?

We reached the bar. We leaned. We ordered sophisticated cocktails. We leaned some more, nodded knowingly to each other, eyed the girls, turned and sipped our drinks, eyed the girls again, smiled and I (forgive me, I was a novice – if I’d been in my car I probably would have hooted my horn like the stupid prick I am) winked at the least frowny one, sitting pretty in red, hair piled high and curly (the eighties, remember), shoulder pads to rival mine.

She smiled in response and I leaned back so far I would have toppled over if my shoes hadn’t been so heavy with polish. I couldn’t think of anything I could do that would make me look more cool, more ‘sophisticated’, more worthy of her flirtations – until Dick suggested I help myself to some of the weird-looking complimentary nuts from the bar.

And the more I crunched, the more that red goddess and her hench-goddesses laughed. 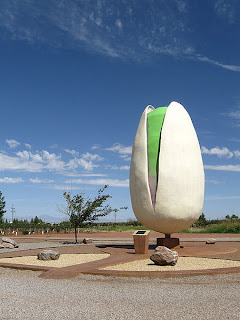 But, like all semi-intelligent creatures, I learned from my experiences that evening. I learned PDQ where the rest rooms were, thanks to all that crunching. I learned that some cocktails pack a punch like Ali. I learned that one red wine tastes pretty much the same as any other after three or four bottles. And I learned that dentists are worth every penny they fleece from us. Fleece on, dear dentists, fleece on!

But the biggest thing I learned that night is that it’s just plain lazy to serve those bloody nuts in their shells.

Pic courtesy of AllenS.
Posted by Jack Ramsay at 9:37 AM