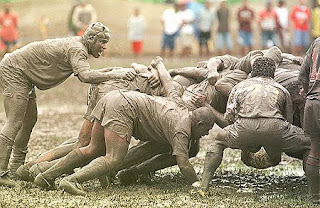 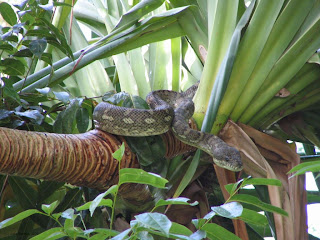 One tub of lard and I'm anyone's.

I'm no stranger to snakes. I come from Scotland, after all, where the adder still rules the moors. Nah, that's crap - I walked the hills of Perthshire and beyond for years and years and years, and never once saw an adder. I think they're related to the pond-dredging haggii - they're certainly just as rare. Still, a few of my friends claim to have seen one, and that's good enough for me.

Then I came to Australia. But I didn't just rack up here and expect to fit in. I did my homework. I found out what could sting, bite, nip, paralyse, hypnotise or even kill me. I'd list them here for you - from ants to ticks, to wasps, spiders, caterpillars (that's just taking it too far!!!), dingoes, kangaroos (they fight dirty...gouging little so-and-so's), crocs and of course snakes - but it'd take too long and I've got tea brewing. Oh, there are more. And all are in the 'most dangerous in the world' category, or 'the most poisonous...' or 'just one bite can kill a million elephants...'. You get the picture.

So, when I arrived in Australia in April 2000 with my dear lady Alison, I was alert. I was prepared. Nothing would sneak up on me and bite my bahoochie (bum). No red-backed critter would nip my cheek while I contemplated the state of the Chinese economy in the dunny at the end of the garden. Nuh-huh.

We rented a place in Perth in Western Australia, moved in, and after the removalists had gone we sat outside with a 'coldie' or three and breathed a big sigh of relief - we'd arrived in Australia at long last. The sun went down, the cloudless sky turned purple and eventually we clambered over boxes and cartons to get to the bed, exhausted from the stress of moving home from one side of the planet to the other.

I didn't get much sleep. All those documentaries I'd watched; all those natural history museums I'd visited (and all their gift-shop books I'd bought) came back to haunt me. I'd visions of huntsmen - like the one I found in my new garden shed a few minutes after picking up the keys - marauding over us as we slumbered with our mouths agape (I've seen Alison sleep like that all night - all night!) I tried to relax, thought of haggis hunting on the Perthshire moors, and was soon drifting off...

And that's when the hissing started.

It wasn't even one of those 'is it, isn't it?' moments - it was loud, unmistakable hissing. A bloody snake was in the house! Already!! I knew it sometimes happened in Australia, if screen doors had been left open. We'd had the removalists at work all day, and every door had been wide open. And I knew that snakes here are viscious, deadly, pure evil and nasty for the sake of it...

I sat up, straining for some indication that I was imagining the noise (hoping I was imagining it.) But no. It was clear as clear can be; so I poked Alison in the ribs and she confirmed I wasn't hearing things.

I can't tell you what I said in reply - I have a reputation to uphold - but after about twenty minutes of lying there (no, I wasn't quaking, even if Alison says I was...pfft!) the noise stopped. No hissing.

Ah, it's wonderful moving to a new country. See, in Scotland we never once had to water our garden. Installing a bore water irrigation system was a home improvement project that had never crossed my mind.

The thought of killing my land lord did cross my mind, however. I mean, who the **** (thanks to Anonymous for the correct spelling of **** there) sets an irrigation system timer to come on at 4am? Eh? Who?!

Yes, I come from Scotland where snakes rule the moors, and men never have to dodge those invisible, pop-up-when-you-least-expect-it watering heads when walking on someone's lawn. Pfft. 4am.

It's been almost ten years since we arrived in Australia, and it's true what some people say - you do become used to the heat, and the mozzies...and the snakes. In fact, it's snake season now and the slithering from the rafters tells me that Malfoy the python (it's so handy having a name for each snake, I find) will be out sunning himself in a few minutes. I might just go get that tub of lard, grease myself up and see if he fancies a wee wrestle.

Published in The Irregular newspaper, Kingfield, Maine, USA - November 2009
Posted by Jack Ramsay at 7:50 AM 5 comments: