I was reading the paper this morning when I saw an article about some meteorite that landed in Australia 40 years ago having finally given up some secrets. Amazingly, a boff or two had found that it contained ‘millions of different organic compounds’, whatever the hell that means. But the really, REALLY amazing thing about the article was that this meteorite was called the Murchison meteorite...and it landed in an Australian town called...Murchison! Freaky or what? I mean, what are the chances?!

Okay, so I’m having a larf mate (for anyone who’s still scratching his baldy bit, they named the damned thing after the town, for Pete’s sake) but in real life coincidences slacken our jaws almost every day.

Example: I went to Scotland on holiday a few years back. Had a great time and the weather was fantastic. Yeah, I know...who’d’a thunk it. But there I was at Jura House gardens on the island of Jura 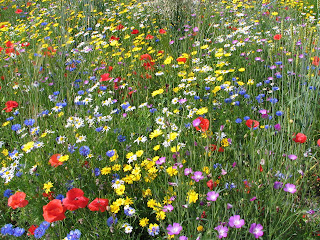 (another coincidence? too damned spooky, if you ask me...) poking my nose into some flowers (them flowers, in fact -->) while Alibal went off to get us some tea from the marquee, when a polite and educated elderly lady of the ‘have-gaiters-must-walk’ persuasion approached and started chatting to me. Her opening gambit was, of course, about the sunny weather – it must have been 28ºC (about 82ºF) – and my new chum had a good old rave about the heatwave. I said it was just perfect temperature for me, since I’d lived in Australia for a few years and was used to temps much higher than 28. (Aside: yesterday it was 37ºC here, or 98.6ºF – just right for demolishing a garden shed.)

So we chatted some more and she asked what brought me back to Scotland and I told her I was taking the chance to research my family history – I’d been over to the Isle of Skye looking for Bruces, down to Fife looking for Ramsays, and up to Aberdeenshire looking for Eastons, and now I was taking a wee break on Islay, checking out the distilleries and just enjoying being home.

Then Catriona – we’d introduced ourselves by that stage – asked where in Australia I was from, and I told her I have a place on the western outskirts of Brisbane, in Queensland.

‘Really?’ says I. ‘Me too. I’ve never met her though, since I’ve only just found out about her.’ (I’d spent time just a few days before with my cousin, Tony, who’s mad for the family tree stuff and can tell you which Fitzgerald married which Bruce, and which Ramsay married which Mitchell, where and when, and what they all did for a living way back in Umpteen Oatcake.)

I almost choked on the tea Alibal had brought over from the marquee. ‘That’s a coincidence. My cousin’s from Sarina.’

Our faces may have taken on the same thoughtful look at this point, I don’t know – but after a pause, and almost in perfect unison, we said, ‘Cath Hutton.’

If you’d told me before I set out on my trip home that I’d chance upon a relative of a relative in a remote but beautiful part of Scotland’s west coast, on the sunniest, hottest day of the year, I wouldn’t have believed you. But it happened. Of course it happened – in real life coincidences happen all the time.

Since that encounter with Catriona, I’ve met up with our cousin Cath many times, and we still have a good old head-shaking session when we talk about that chance meeting on Jura.

I just wonder if some fluke of timing ever inspired Jane Austen, who loved to pepper her plots with amazing, entertaining (and often convenient) coincidences. No matter, because it’s obvious to me that life imitates art, just as much as art imitates life.
Posted by Jack Ramsay at 10:02 AM