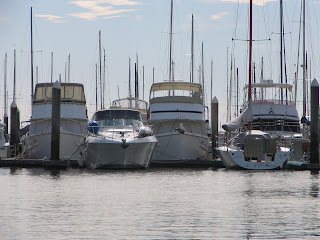 I told you a while back that I’m an idiot. But just in case you’re under the impression I’m the only idiot from my village, here’s a story about my greatest rival for the post of Village Idiot.

I was out with some friends a few weeks back, at a place called Manly, a suburb of Brisbane way out on Moreton Bay – seafood, sand, swaying palms, kids chucking footballs at pelicans – and there’s a marina full of all kinds of boats (that's a picture of it.) Looking across at the masts and gel coat gleaming in the sunshine, I supped a few coldies and thought of a summer sailing trip I took with a couple of mates when I was a younger man back in Scotland. Let’s just call these guys Daffith and Norbert. That’s their names, after all, and us idiots like to keep things simple.

Norbert came up with the idea of ‘the boys’ heading away for a weekend on his yacht, while ‘the ladies’ went off and did whatever it is ladies do. So we packed provisions (beer and a bottle opener) and drove across to the west coast where Norbert had The Wee Beastie moored at Dunstaffnage marina, near Oban. There are lots of uninhabited islands around there, and the marina has a pub called The Wide Mouthed Frog – a great combination of facilities if you like beer and sailing.

We arrived in Dunstaffnage just after seven on Friday night. The plan was we’d spend the evening sailing down the coast to Kerrera, a small island just south of Oban, anchor there for the night, then on Saturday morning sail to Tobermory, the hip-swinging razzmatazz and gambling capital of the island of Mull (population: three sheep and a retired school janitor).

Norbert parked the car and I nipped round to the trunk to pick up our stuff, under the assumption that we were heading down the gangplank to the yacht. Not so. Norbert had amended the plans and led Daffith and me straight into the pub (to collect his winnings on a bet, he said.) We’d have a couple of pints, then lug the gear down to the boat and head off while the light was still good.

Eight ales and six hours later, it’s pitch black and we’re singing at the tops of our voices, staggering down the nine-inch wide gangplank with five fathoms of cold Atlantic ocean a few inches either side of us – three blind idiots with no sense of balance (thanks to that beer), no sense of direction (yup, the beer again), each with a bag over his shoulder and a crate of warm beer in his hands.

Now, I can’t really recall what I’d expected from Norbert’s boat, but it fell a good few feet short of those expectations. I spent the night with Daffith’s stinky foot by my nose, and the strong pong of diesel coming from the engine compartment did nothing to ease my suffering. I craved water, but unable to find a light switch or a torch I resorted to popping a warm beer to quench my thirst. (Because? Yup – I’m a fully qualified idiot.) I was all beered out by the time the sun came up just after 4am (Scottish summers can be so unforgiving to the afflicted), but believe me when I tell you I was positively sprightly compared to Daffith.

Norbert’s insistence that we stuff a hearty breakfast into us before getting under way was probably what caused Daffith to barf. Frankly, I found the gentle swell of the harbour quite therapeutic, especially so since it was mingling with the aroma of bacon and eggs sizzling away on the stove. But Daffith turned his back and chucked an imperial bucketful all over the boat next door – much to the displeasure of the retired couple only a few feet from us who were, at that very moment, washing down their decks.

I don’t know what all the fuss was about – they had their bucket out anyway; and no real harm was done. Maybe they were peeved that we’d woken them at 2am with our inglorious rendition of ‘New York, New York’. In any case, Daffith started to get some colour back on his cheeks after our neighbours’ swearing had blown itself out. Then we were off to Tobermory.

Norbert manoeuvred us out of the harbour about noon and I suppose that’s just about when I realised I had some genuine competition for the title of Village Idiot. Our Captain handed out life jackets (the type that come with a gas canister that inflates the thing when you pull a rip cord – the asthmatic’s delight) and insisted we put them on – the sea was rough. Rough enough to set Daffith off again.

Feel free to picture the scene: Daffith draped over the gunnel, chundering into the grey Atlantic ocean, which is doing its best to slam the boat hard enough to make him fall in. After a while he takes a break and joins us up at the tiller, making light of his condition but studiously avoiding the word ‘beer’. The sails are whipping something fierce, the boat’s bucking like a bronco with fleas and the salt spray has us all soaked. Even Norbert’s turning a bit limey, so I look at Daffith - and that’s when I notice his life vest is on back to front. I’m just about to tell him when a wave knocks us sideways. Daffith falls backwards, almost toppling over the side and into the water, and in his blind panic to grab something to steady himself he pulls his rip cord and inflates his back-to-front life jacket.