I’ve got a few minutes, so I thought I’d do a wee blog this morning. I had a long think, came up with nothing, so decided to have a sup of coffee and a gander at the paper while my cogs finished their union meeting and got back to work. And, hey presto, a subject. A glorious, ripe, bulbous subject that’s just perfect because it gets my blood boiling.

Now, some of you who have read this blog (has anyone read this blog? hello? hello? did I just see tumbleweed?) know that I tend to go for the easy, self-deprecating stuff, with a smidgeon of chucklage thrown in to excercise the old laughing tackle. But today – and please feel free to look away if you don’t like the swearies – I’m going to break with that tradition because I’m so fucking over the pile of shite this world is festering into.

See, I’m a Scotsman. I’m an Aussie too, but we can set that aside for a wee while. And because I’m a Scotsman, and a football fan (in my spare time I take a rest from that particular torture by stabbing myself in the thigh with poisoned cat claws), so because I’m a football fan I couldn’t help but take an interest in the article on the BBC news website today – Police Fears Over ‘Anyone But England’ T-shirt.

Apparently, the cops in Aberdeen have taken it upon themselves to wander into a guy’s kilt shop on George Street and warn him about displaying these ‘ABE’ t-shirts in his window. It could ‘cause offence’, they say. Because it’s ‘racist’, they say. They have a duty to ‘preserve the peace’, they say.

I know what their bloody duties are – I was a cop in Tayside before hopping a plane out here – and sending a beat cop to pressure some guy into changing an inoffensive and purely ironical window display ISN’T what they have a duty to do.

Let me reiterate: they’re advising the owner of Slanj (the shop – great looking website, by the way) that his window display could be deemed ‘racist’. And then they go on to point out that Aberdeen, like other parts of Scotland, ‘...has recorded incidents relating to nationality...’ Hm. Is that so?

First, race and nationality are not one and the same. Go check out the English cricket team if you’re in doubt. And the Scottish one, too, if you really must. Didn’t find what you were looking for? Check out the British Army.

Second, this has absolutely FUCK ALL to do with race, and everything to do with HISTORY. See, since 19666 (yes, El Diablo was involved) – the year when almost all of Scotland was shrouded in the smoke of smouldering TV sets...my father told me our old brick shithouse valve-bustin' Baird took three kicks before it coughed out sparks (ah, they don’t make ‘em like they used to) us Scots have had to put up with ‘racism’ from the English.

Which takes me to point three. It isn’t fucking racism! It’s light hearted BANTER between one and a half great footballing nations. Nothing more. The English expect it of us. They have a laugh about our blinkered approach to the world and our inability to reach the finals of ANY sporting event (tennis excepted – thanks Andy), and we laugh when anyone they play at football knocks the swagger out of them. That’s why us Scots support anyone but England. Not racism. Jealousy. See, we're fed up of our World Cup campaigns stalling at every red traffic light... 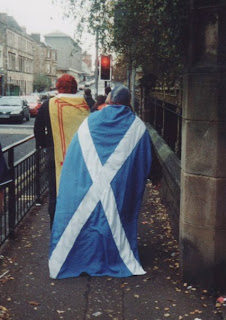 But how could anyone be so desperate for confrontation as to call it racism? Or nationalism? Or any colour of ism you care to think up?

Another thing: exactly where do we draw the line as we struggle to define the term ‘race’? As far as I’m concerned, I’m with Ross Lyle from Slanj: us Scots and them English are one and the same race. We’re British. And we all have a British sense of humour.

What we’re seeing here is another example of the world (or is it just those who are connected in any way shape or form with the justice system?) gone mad. So, my message to the cop who thought trying to throw his weight around in a kilt shop would be a great way to spend a few minutes of his shift on a cold shitty day is this: fuck off and catch a mugger, ya mug.

P.S. If I wasn’t such a tight-arsed Scot, I’d buy one of those t-shirts and wear it every game England played. After all, and as usual, it’s the only connection I’ll have with the world cup. Oh, wait...no. No it isn't...where's my Australia kit? :)

PPS Anyone who doesn't see the irony that's inherent in this article (the owner of a kilt shop being told he's being racist against the English) doesn't know the history of the kilt.

Pic courtesy of David Lodge. Thanks, Dave.
Posted by Jack Ramsay at 9:11 AM