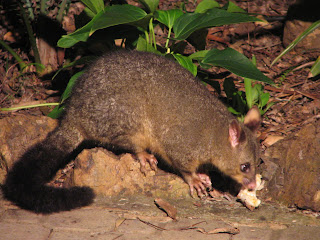 The thing that’s surprised me most about Australia since I came to live here ten years ago is how easy it is to get used to the beasties. The stories I’d heard before coming out here weren’t enough to put me off, but they did make me wonder about how I’d react to my first huge spider incident, or to finding a scorpion in my boot or having a billion flies land on my Chicko roll. I was reasonably sure I’d cope okay, but a man never really knows until it happens. As it turns out, I was fine with all of the above. But one incident lives with me to this day as the singularly most gruesome thing I’ve ever seen in Australia. If you’re squeamish, better look away now...

Alison’s brother and his wife came out from Scotland to visit us in April one year, and brought their four-year-old twins, Ethan and Tamzin, with them. We had a great time visiting the theme parks down the Gold Coast, taking a trip over to Stradbroke Island and driving along the beach (which the kids loved), going to South Bank parklands to swim and generally enjoying each other’s company over too much rich food.

But the thing that brought the biggest smiles to the twins’ faces was when it grew dark outside and the possums came down from their beds in the palm fronds to feed on the bananas and nuts we treat them to on the patio every few nights. Tamzin stood at the lounge window, mesmerised by their fluffy tails and cute little cat-like faces, so much so that she named the cutest of them Hush – ‘...because that’s what you do when the possums come down to feed’ (she was only four, remember).

A few days from the end of their holiday, Adam, Michelle and the kids went off on a pre-planned trip to Sydney to visit some friends of theirs. While they were away, Alison and I kept up the routine of occasionally feeding the possums, partly so that they’d be there for the kids to gawp at when they got back from Sydney.

The night before our guests got back, Alison and I were snuggled up watching Monarch of the Glen on telly (which, twee as it is, always makes me homesick enough to pour myself a Scotch). Hush the possum was down on the patio, feeding on a banana, and when she’d had her fill she jumped onto the trunk of a palm tree and disappeared up into the shadows.

I turned my attention back to the telly, but a few minutes later Hush crashed to the ground. I’ve seen possums fall out of the trees before, and they’ve always taken a few seconds to compose themselves before running off or starting a fresh fight – they’re very territorial. But Hush was dead. Lying on her side with her eyes shut, not breathing, not even twitching.

Alison and I looked at each other – the last thing we wanted was for her brother and his family to come home and see a dead possum in amongst the bromeliads.

‘If she’s still there in the morning I’ll go out and bury her,’ I said.

‘What the hell’s wrong with her?’ Alison asked, but she’d no sooner finished speaking when a four-metre python clattered onto the pergola roof and fell to the ground beside Hush. 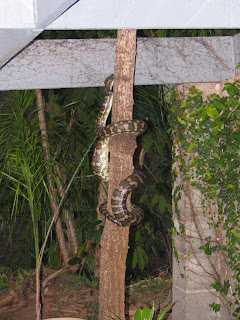 After a few minutes of lying absolutely still (during which time I was really confused – what was up the tree that would kill a possum and a python?) the snake started to flick his tongue in and out, then uncoiled himself and moved towards Hush.

Over the next hour or so, Alison and I stood hypnotised as the python unhinged his jaw and slowly enveloped Hush’s body, a mere two metres from our lounge window. When he was done, he just as slowly eased his belly up onto the edge of a flowerpot to push Hush just a little further down, then slithered off into the darkness.

Maybe one day I’ll log on to YouTube and post the video I took. Or maybe I won’t. That was the first time I’ve ever not finished a glass of whisky. Know what I’m saying?

Anyhoo, the next day we picked up our guests from the airport, took them home and pretended for the kids’ sakes that some imposter was Hush. And I prayed like mad that the python (who I later named Malfoy) had enough in his belly to see him through hibernation and wouldn’t be back for seconds before our house guests left for Scotland.

Yes, we resorted to a little white lie, and I see no reason why it can’t be...wait for it...Hushed up for all time to protect the innocents.

Who groaned?
Posted by Jack Ramsay at 8:50 AM