When I first met Jack Ramsay, I was a naive girl. I knew little about Scotland... or Australia, for that matter. Befriending a man 'from away' has been a very interesting experience. Educational, to say the least.

Way back then I asked Jack what, exactly, a haggis was. If you've read his blog posting, 'The Idiot', you have an an idea of the tale he told me. And, like the trusting girl I was, I believed him. It wasn't until some time later that I discovered the truth; that haggii are NOT snorkle-nosed pond dredgers with ferocious attitudes, but rather, they are mild-flavored plants that grow on an island off the coast of Scotland. The same island where Scotch tape was invented, in fact! If you're not familiar with the succulent plant, it is similar to a cactus. (Two or more of them are called cactii, of course. Haggis, haggii. Cactus, cactii.) I can't believe it took me so long to figure out he was pulling my leg! Snorkle-nosed pond dredger, indeed! Who, in their right mind, would eat one of those??

Jack thinks he's so smart! But he can't fool me... I always discover the truth!

Below is Burns' famous Address to a Haggis. I love this poem. I've memorized it, even though I know that my pronouciations are off and I don't have a Scots accent. I am The Butcher of Burns, no doubt about it. In celebration of Burns Day, which Jack has told me is January 25th, and to commemorate the publication of Jack's 'The Idiot' in my hometown newspaper, The Irregular, I've written my own poem about haggii. For even though I now know the truth, I will forever think of haggii as fierce little Scottish critters who dredge their pond bottoms with their snorkley noses. Sheesh. I used to be so gullible!

Address To A Haggis
by Robert Burns 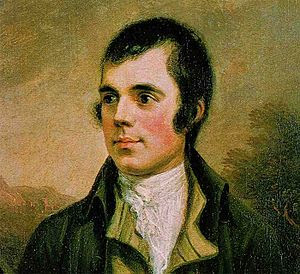 Fair fa' your honest, sonsie face,
Great chieftain o' the puddin-race!
Aboon them a' ye tak your place,
Painch, tripe, or thairm:
Weel are ye wordy o' a grace
As lang's my arm.

The groaning trencher there ye fill,
Your hurdies like a distant hill,
Your pin wad help to mend a mill
In time o' need,
While thro' your pores the dews distil
Like amber bead.

His knife see rustic Labour dight,
An' cut you up wi' ready sleight,
Trenching your gushing entrails bright,
Like ony ditch;
And then, O what a glorious sight,
Warm-reekin, rich!

Then, horn for horn,
they stretch an' strive:
Deil tak the hindmost! on they drive,
Till a' their weel-swall'd kytes belyve,
Are bent lyke drums;
Then auld Guidman, maist like to rive,
"Bethankit!" 'hums.

Is there that owre his French ragout
Or olio that wad staw a sow,
Or fricassee wad mak her spew
Wi' perfect sconner,
Looks down wi' sneering, scornfu' view
On sic a dinner?

Poor devil! see him ower his trash,
As feckless as a wither'd rash,
His spindle shank, a guid whip-lash,
His nieve a nit;
Thro' bloody flood or field to dash,
O how unfit!

But mark the Rustic, haggis fed,
The trembling earth resounds his tread.
Clap in his walie nieve a blade,
He'll mak it whissle;
An' legs an' arms, an' heads will sned,
Like taps o' thrissle.

Ye Pow'rs wha mak mankind your care,
And dish them out their bill o' fare,
Auld Scotland wants nae skinking ware
That jaups in luggies;
But, if ye wish her gratefu' prayer,
Gie her a haggis!

A Scotsman told this girl from Maine
That haggii roamed our hills and plains,
Our Highlands split, the clansman claimed
In times long past.
And when they rent t’was left behind
A dredger fast.

This Highlander had honest face.
Alas, in Maine there is no space
For haggii to take o’er the place.
Not at The FARM!
Their snorkel-nose does cause disgrace!
(T’is long’s my arm!)

Now Scotsmen on their wee small isle
Believe the haggii can beguile
Large men who find the kilt in style
(Like Scotsmen do)
And then, a peek makes this girl smile,
(Yup, they’ve got two!)

These clansmen cinch their armor up
To hunt the haggii for their sup
(I think that they should wear a cup
While on the quest.
For haggii, fierce, will always lunge
At groin or chest!) 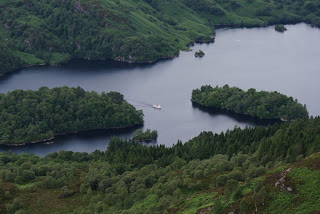 These hairy Scots are not afraid
They capture dredgers when they raid
The pond; through thigh-high water wade
To snare the beast.
With nets and ropes, they make the grade
And have their feast.

While over ‘cross the Pond, in Maine
This native girl has made it plain
She’d rather all the ponds to drain,
She learned a lesson.
From on the shore she takes her aim…
Fires Smith and Wesson. 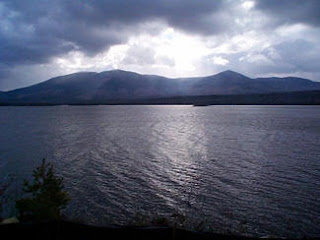 Not only does she have her prize,
The bullets, they did tenderize
The haggii, which are bigger size
Than Scotsman’s beast.
(Of course they are! We feed them well
Herein, Down East!) 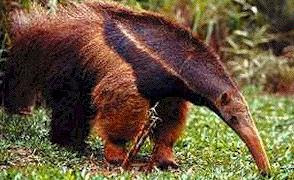 Ye Pow’rs wha mak mankind your care,
Remember Scots, and how they fare,
Those kilted men still use the snare
But it’s not fun.
Wee sleekit coorin timorous beasties
Die best by gun! 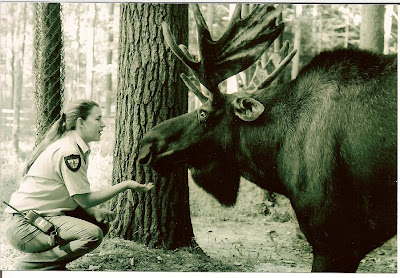 The above photo was taken in Gray (note: spelled with the proper 'a', instead of 'e') Maine. The emblem on the uniform is like an old friend to me: My father wore that same one for the first 19 years of my life. The large-sized gentleman to the right is a bull moose, and as you can see, I could not possibly confuse him with a Scottish haggis. He might be 'sleekit' and a 'beastie', but 'wee coorin tim'rous' he's not!
Posted by Karen Bessey Pease at 2:34 AM